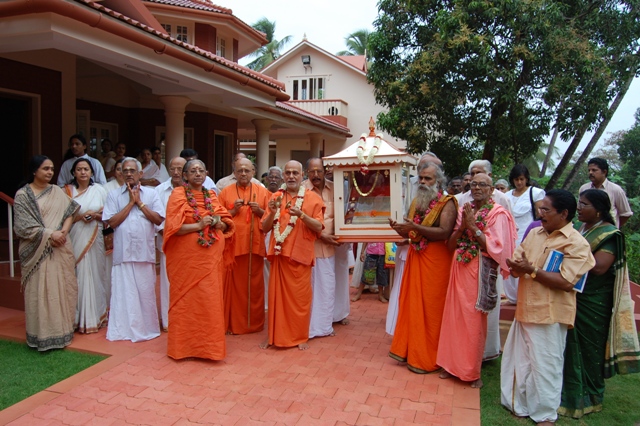 Sreemad Bhaagavatam is an invaluable epic composition, having 12 Skandhas. It is a Paaramahamsya Samhita. ‘Svaadu svaadu pade pade’ (exceedingly delightful word after word), is the proverbial fame it carries. It is a great book of virtues and values, meant to ensure the wellbeing of the society. Its contents are eternal and relevant in any period of time. They deal with the human mind - its complexities and conflicts. To enlighten the intelligence and empower the mind, to remain always cheerful, contented and balanced under all circumstances, to live with an undimmed note of fulfillment and freedom – these are what the Bhaagavatam emphasizes and imparts. This unique spirituo-devotional Scripture renders its messages with the sublimity of reason, the force of truth and the testimony of experience, that should grace any scriptural narration.

The wisdom of the Self, supremacy and relevance of Dispassion as well as the Elixir of devotion are the chosen subjects of the Text. In each of these, it has interwoven the other two with a beauty, elegance and mastery. The narration is powerful, appealing and exhilarating to arrest the reader or listener alike, persuading them to experience the delight of reciting the text assiduously.  The unparalleled creation thus lives in the minds of millions making India a matchless legendary land of spiritual ethos and ecstasy.

Placing a variety of illustrations ranging from children, couples, parents, ascetics, saints and mendicants to gods and goddesses, Vyasadeva reveals a beautiful collection of thoughts, words and deeds, each of which has an eternal message to the complex human life, whether at home, in the professional front or in the society at large.  Each word of this great Text grows sweeter every day, enriching and fulfilling the human heart.

In Parikshit, the first of the illustrations, is a living message for all. The King of Pandava heredity went to the nearby hermitage of Sage Shameeka to quench his thirst, while hunting in the forest. Finding the Sage absorbed in meditation, he went out in wrath and brought in a dead snake with the tip of his bow and placed it on the Sage’s neck.

Where is royal intelligence, famed for its breadth and vision, and how come such a precipitous downfall!

Shameeka’s son was shocked by the sight. “None but the proud Kshatriya could have”, he thought, “done the crime”.  After throwing the dead snake away, he rushed to the river. Holding some water ceremonially in his palm, the hurt mind pronounced a powerful curse on the unseen intruder:  “Let him, whoever has put the dead snake on my father’s neck, be bitten by a living cobra on the 7th day from now.” The act of the hand and the words of the tongue, both, were equally triggered by the hurt mind!

“Is the strength of the muscle greater than the power of an ascetic heart?  Can matter be superior to the mind?”

Shameeka felt greatly hurt: “Too severe a punishment for such a small offence”, were his first words to the heaving son.  “We are ascetics.  Patience and tolerance are the glory to adorn us always. Never should we feel ill of others.  Be kind to the core.” Yes, real teaching and correction, to be true, should start right in the early age.  A child’s brain is the best to receive life’s lasting lessons.

Thus commences the narrative messages of Sreemad Bhaagavatam.  In Dhruva, Prahlada, Prithumaharaja, Kashyapaprajapati, Kapila, Rishabha,  the Gopikas, and later in Uddhava, Krishna and the rest, the reader and listener find a proximity, a fondness and identity, deep enough to enfold the mind, enrich and empower it throughout.

Sreemad Bhaagavata is a Scripture of ever-relevant Values and Messages, which should become the warp and woof of daily household life.

The whole universe is but an expression of the Supreme Reality or Supreme Intelligence.  The three words ‘Satyam param dhimahi’ mark the end of the first verse of the Text.  They also appear in the concluding portion of the Text – Ref 12.13.19.  Thus, it is evident that the Bhaagavatam is an exposition of the Supreme Reality, marked by these two inaugural and concluding revelations.  Is it not enough to emphasize how factual, realistic and complete the whole Text and its contents are?

Bhaagavatam is not just a theory.  Its expositions and enunciations, at every stage, touch and involve one’s inner personality – the mind, intelligence and ego – with a view to enrich, empower and enlighten them, so that they will function with harmony and integration, generating benevolence to the world and fulfillment to oneself.

The variety of subjects Sreemad Bhaagavatam discusses include (i) The human individual (ii) the world around him (iii) the origin as well as sustenance of creation (iv) its dissolution (v) the principles (dharma) which govern the preservation of the entire creation, particularly the life on earth (vi) what the human individual is supposed to do to preserve himself as well as the world as a whole, and many allied subjects. In order to string all these in a manner to evoke appeal, admiration and devotional fondness, Vyasadeva adopts a style linking facts and imaginations, incorporating religion, Philosophy, Spirituality, yoga and metaphysics.

The uniqueness of Bhaagavatam is that it makes no exception to any sight, scene or episode in the matter of drawing from it lessons and values of life. For the Sage author, an avadhoota before the emperor is as welcome as a prostitute of Janaka’s Mithila.  For our spiritual thinkers and philosophers, all are alike.  The difference, it is all, is in the nature of the individual being good or evil.

God is not at all distant even to the most villainous or vicious heart. The only question is whether one yearns to be with Him, to make Him one’s own. Pingala, despite her accursed profession, displayed such a splendid resolution. How she transformed her desperate plight to spiritual quest, yearning, and how with evinced tenacity, she fulfilled it in such a short time, will remain a lesson for all forever.

See how boldly, confidently and freely the Sage author makes his statements, confessions and revelations, even about the truth and validity of the stories narrated in the Text.  Bhaagavatam has one aim throughout, of instilling devotion to the Supreme Lord, dispassion towards the transitory world and direct knowledge of the inmost paramatma. In order to fulfill this, the author discusses, debates, reveals and avers anything necessary, making sure that all that succeeds in leading the mind to the goal set by him. The standard and style he adopts stand unique, sublime and singular in every way.

Bhaagavatam records an ancient thought process (puranam), pure to the core and extremely dear to the devotees of Lord Hari.  It sings the supreme spiritual wisdom, adorning the heart of enlightened souls (Paramahamsa).  It presents the concept and goal of actionlessness (naishkarmyam), bonded with spiritual knowledge, dispassion and devotion.  By hearing, reading and reflecting upon it, the human will be freed of all bondage.