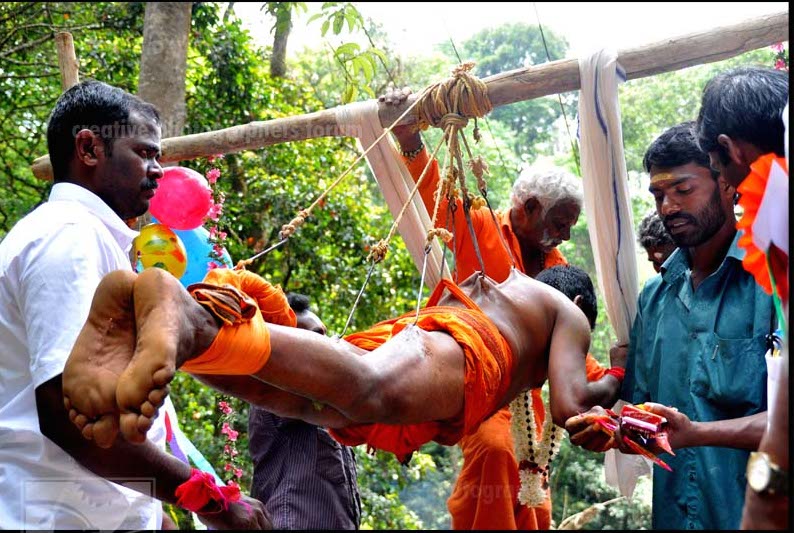 It was between 1985 and 1995 that Swamiji pioneered a few mass movements to rid the society of illegal and savage practices followed in the temples in the name of devotion. The three important successful movements were: (i) stopping the criminal practice of Thookkam (suspending a hired man from a 30 ft high scaffold, by hooks pierced through the back) in the name of an offering to the Goddess of Elavoor Puthankavu; (ii) allowing harijans to offer Pañca-vādya (a special musical peformance) to Lord Sri Krishna of Guruvayur; and (iii) stopping the obscene singing as an offering to the Goddess of Kodungallur.

Such practices, aided and abetted by vested interests, were perpetuated by the devotees for centuries, more out of fear of the divine than devotion.

When Sannyāsins take up such movements, it will be strikingly different from the usual social reforms. They will not belittle or disparage religion. Rather, taking their stand on the eternal core of religion, they will strive to cleanse the religious practices by removing the aberrations and perversions.

Rooted firmly in the essence of the ageless Vedic culture, proclaiming the true intentions of spiritual and devotional pursuits, quoting profusely from Śreemad Bhāgavatam and other devotional scriptures, Swamiji proceeded on his austere mission to rid the society of the sinful practices perpetrated in the name of devotion.

His vision was clear: “The temples cannot be the citadels of decadent culture and savage customs. They must be the seat of noble and sublime practices – a few steps ahead of the rest of the society.” 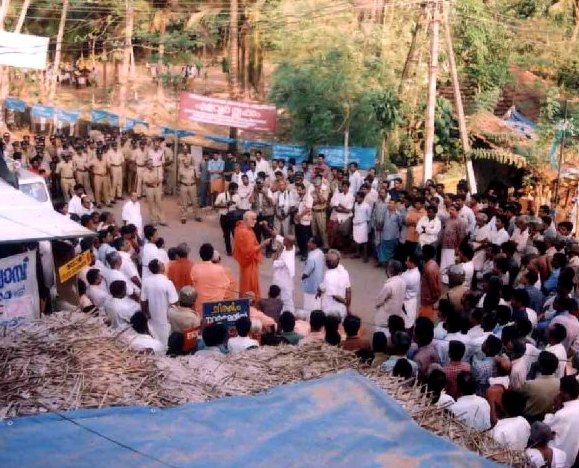 It verily initiated a powerful thought-revolution through the articles published in the newspapers and weekly journals. There were arguments and counter-arguments leading to greater and greater clarity. It soon became clear that although one wrong practice localized in one temple might have been responsible for initiating the movement, the role of that temple was rather incidental; the real disease was much more widespread and firmly rooted in the non-thinking mind of people, in their apathetic attitude towards social evils. The real movement was wrought on a much wider canvas in the minds of people through transformation brought about by the news media debates.

In the case of each movement, initially there was a lot of opposition to Swamiji’s viewpoint; then slowly the opposing stance would get attenuated; and finally over a period of one or two years all the articles and statements would only be supporting the movement.

Ratonal minds found reason and sense in Swamiji’s thoughts and actions. But, most of the religious people held back due to fear of the Unknown. The newspapers as usual presented the news and views in a manner that generated a lot of controversy. Many believed, or at least propagandized, that Swamiji would incur the curse of the Deity.

The movements did evoke strong resentment from those of conservative minds. But greater opposition came from groups with vested interest in social or political leadership, who felt threatened by the reforms. The enraged groups often circulated notices labeling Swamiji as a “temple-hater”, urging that he should not be allowed near any temple. In one case, they distributed leaflets in the middle of the night to all the houses in our village, maligning Swamiji and the Ashram, fabricating scandalous stories.

But Swamiji received the opposition with his characteristic fondness. At no time did he feel the least dislike or irritation towards the opponents: “They deserve more love, because they do not know!” In fact, he never expressed intolerance towards any opposition, saying that: “The strong opposition to change is always a safeguard for our society. Otherwise, any change introduced by shallow ephemeral thinking also will come to pass, destroying the fundamental fabric of our age-old civilization.”

During one of the movements, in a seminar called by the Devaswom Board, a person opposing our movement spoke for quite a long time. But, whatever he spoke was not at all relevant to the debated points; he was only trying to malign Swamiji as a person. It was quite an embarrassing situation for many present there. But, after the seminar was over, Swamiji hugged this person and patted him saying that he spoke very well! This person also, with the widest grin on his sunken face, touched Swamiji’s feet.

After we came out of the hall, I asked Swamiji, “Why did you pat that person? Did he really speak well? Was he not trying only to slander you?” Swamiji said in an indifferent tone: “I did not really hear what he was saying.”

Our Swamiji’s legendary tolerance towards ill-behaved, even wicked, people has been such that once I had helplessly murmured: “Swamiji, your aspiration to attain greater and greater heights of goodness, in fact, helps people around you to remain bad and often become worse!”

A Friend of all

One salient point in all these movements was to declare our strategy – be it a protest march or breaking the prohibitory order – openly and formally to the law and order authorities. Swamiji had always been stressing that our agitation should be on constitutional ground, and we must take the Government into confidence. During arrests, in countering the Police officer or the Collector, in spite of animated arguments, never was there any angry exchange.

Swamiji would forcefully present his point: “You should arrest the wrong doer. Why are you arresting us, the law-abiding citizens who want the Government to stop the criminal practices? Our demand is constitutional; we are trying to help the Government do what it should have done on its own.” The police officers would humbly try to convince Swamiji that it was only a protective arrest to save Swamiji and to save the law and order situation.

Sometimes, looking at the faces of the police officers, I used to feel that they were almost liking this strange interaction, although apparently it was often quite humiliating for them. In the police station, be it day time or midnight, Swamiji would refuse to go inside, and start nāma-sankeertana in the courtyard. The constables on guard would appear confused not knowing what to do.

The Source of Courage

Many did wonder: How does Swamiji speak with such clarity, confidence, and courage? To question an age-old hallowed custom followed in the precincts of a famous Deity, does not Swamiji’s mind get shaken by the fear of divine wrath, or at least, by lack of confidence? On the other hand, to face hundreds of frenzied people carrying ritualistic swords, standing almost in revengeful stance, or to challenge the powerful hands of the police, does not the peace-loving saintly mind tremble or resent?

The answer is clear and simple. The power and resolve, emerging from Self-realization coupled with ascetic resignation, cannot be subdued by any worldly, otherworldly, or divine fear. Most people did not know the unique spiritual attainment that inspired Swamiji to speak and act in the manner he did. The key to the multi-dimensional loka-saṅgraha of Swamiji lies in his depth of spiritual Wisdom that makes him a non-doer and a non-enjoyer, empowering him to do anything and everything naturally, as does the Creator.

Those were days, when we had no regular scriptural study or lecture in the Ashram. There was no prabhāta-raśmiḥ or puṣpa-samarpaṇam. Only the morning and evening chanting routine was there. But, there used to be intense scriptural discussions and research to crystallize our arguments in defense of the movements. Apart from the usual Ashram chores, my time used to be spent in helping Swamiji prepare articles and statements, taking them to the newspaper offices, meeting the Collector, Supt. of Police, and other officials to explain our stand.

This was a period of intense physical, mental, intellectual and also financial austerity for Swamiji as well as the Ashram. Most of Swamiji’s devotees and disciples did not support the involvement of their Gurudev in this kind of “non-spiritual” activities. They, except only a few, had virtually abandoned him. Even Mataji Sulabha Devi was vehemently against these activities and the irregular lifestyle it meant. She was quite anxious about Swamiji’s physical safety. There used to be strange visitors and guests causing immense trouble to the Ashram life. There were threatening letters and phone calls.

We did not have intellectuals or educated personalities to support us or to play active role in the movements. Only poor uneducated villagers and mendicants were there to join the demonstrative marches (yātrās). But, they would faithfully follow Swamiji’s instructions. The fervent speeches given by Swamiji at the road junctions or market corners during the demonstrations and marches would inspire them to do whatever they were asked to. While marching with them, singing in chorus the Malayalam song (composed by Swamiji) narrating the purpose of the yātrā, I would sometimes wonder if any of my old friends or relatives had seen how cheerfully and “aimlessly” I was marching in procession through the remote villages of far away Kerala, for a “futile religious cause” of a temple!

Once, during the Guruvayur movement, I had accompanied Swamiji to a meeting. In a big room, about twenty people were speaking excitedly, almost simultaneously, to convince each other about their own point of view. Very soon I found every body was eager to speak to me, apparently thinking that I was the person who could understand and agree to his point. The fact was, I was the only person in the whole assembly who was not speaking; because I did not know Malayalam!

It went on for hours. When we came out of the hall, it was evening. Swamiji looked at me sympathetically and said, “I think, today you had the toughest austerity of your life. I am happy that you have endured it well.” Believe me, I was smiling throughout the day!

It is true that the days were not only austere, but difficult and troublesome too. Even the Ashram inmates – the cook who was an epitome of anger, the weird Brahmacharin who was falsehood personified, and the strange visiting guests who would suddenly arrive from nowhere and try to settle in the Ashram for unlimited periods – were not really comfortable. Workload also was quite much, often coming down like an avalanche. But, being with Swamiji, we could carry on happily with a placid mind.

As Swamiji was doing playfully whatever he had to do, we were doing whatever Swamiji wanted to do. So, we too had no feeling of insufficiency or complaint. There was no expectation, either worldly or spiritual.