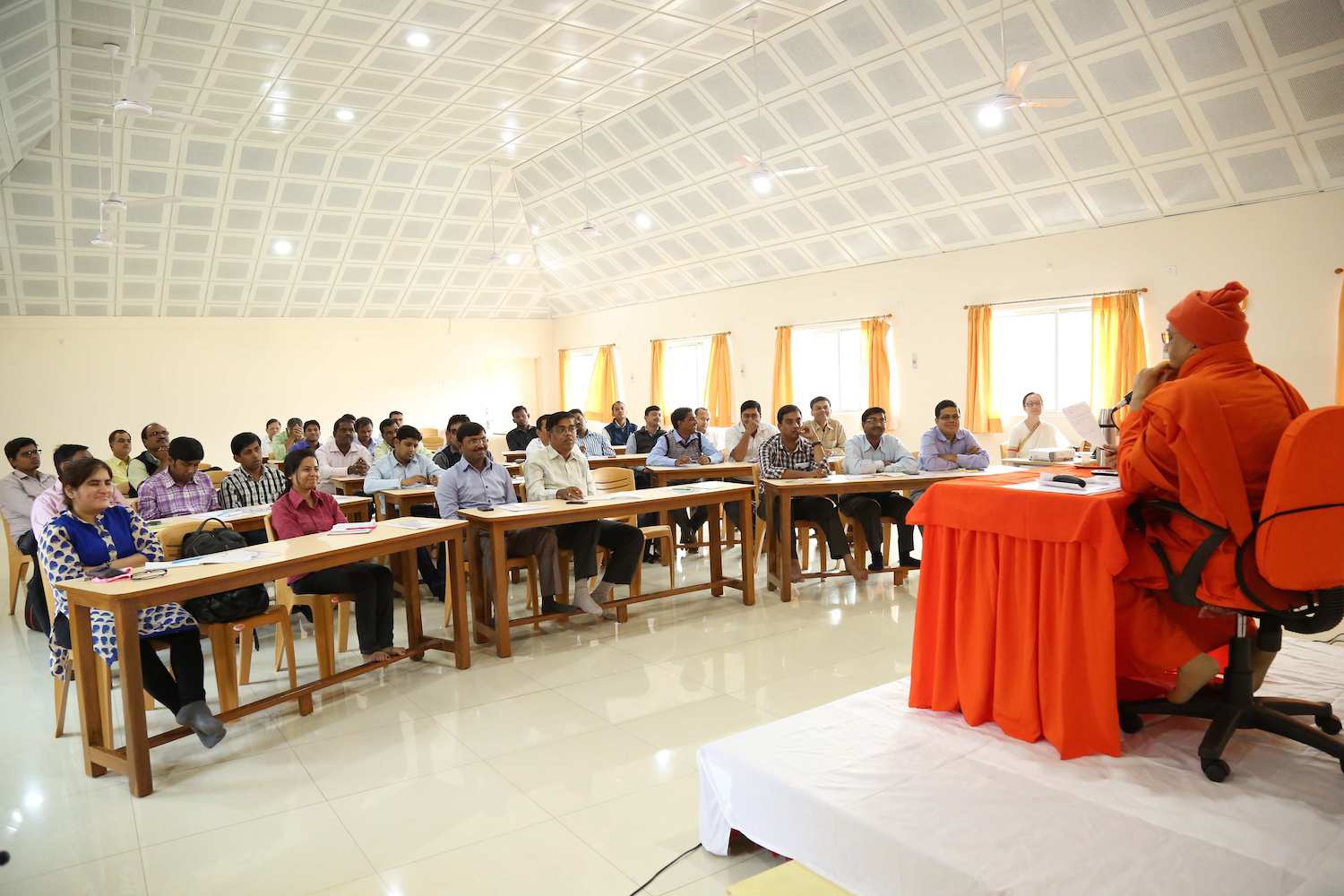 The 19-day Sādhanā śibiram on ‘Enlightened Living’ was conducted by Swami Nirviseshananda Tirthaji from 1st to 19th November at the Centre for Inner Resources Development (CIRD) in Jamshedpur. The intensive programme included a series of public lectures on chapter 13 of Bhagavadgeetā, a residential retreat for pre-registered participants and a two-day corporate workshop on Enlightened Leadership.

A press conference was held on 30th October at CIRD, attended by leading newspapers and television channels of the city. Nutan Swamiji addressed various questions from the media, clarifying that Bhagavadgeetā is not a religious gospel, but a book of life, with a clarion call to make our own personality free from slavery to worldly situations. Nutan Swamiji also spoke about the environment and other social issues concerning Jamshedpur.

On 1st November, the Sādhanā śibiram commenced with an evening of bhajans followed by a discourse on ‘Bhagavadgeetā – a Universal Science’ by Nutan Swamiji. The Vijñāna Bhavan and lobby were decorated with kolam, flower petals and lamp. Nutan Swamiji was garlanded by Sri Vijay Mehta (an eminent industrialist), who was the chief guest for the evening.

Sri Mehta said that the vision of Poojya Swamiji to establish CIRD has now fructified into a beautiful Centre. The evening programme was attended by more than 200 people. Everybody partook of the prasāda.

On 2nd November the residential retreat commenced with the morning class on Muṅḍakopanishad. A small group of 13 participants from various parts of India and abroad spent two intensive weeks engaged in full-time sādhanā. The daily morning discourse was followed by an introspection session and afternoon class on chanting Bhagavadgeetā and discussing the sādhana-chatuṣṭayam. All participants were hosted in Sādhanā-niketan and lovingly cared for by CIRD volunteers.

Observations from the participants about the śibiram included: “Ability to think clearly has been initiated. The programme has modified my thinking a lot”; “I discovered myself! I can now understand myself much better and be in the flow with my natural Self”; “I feel powerful and lighthearted”.

From 2nd to 9th November and 12th to 14th November, Nutan Swamiji covered the entire 13th chapter of Bhagavadgeetā. It was an extraordinary exposition and participants walked out of the hall with joy and illumination. Nutan Swamiji elaborated on the 20 qualities a seeker should imbibe, explaining clearly how each quality can lead one to Self-realization. 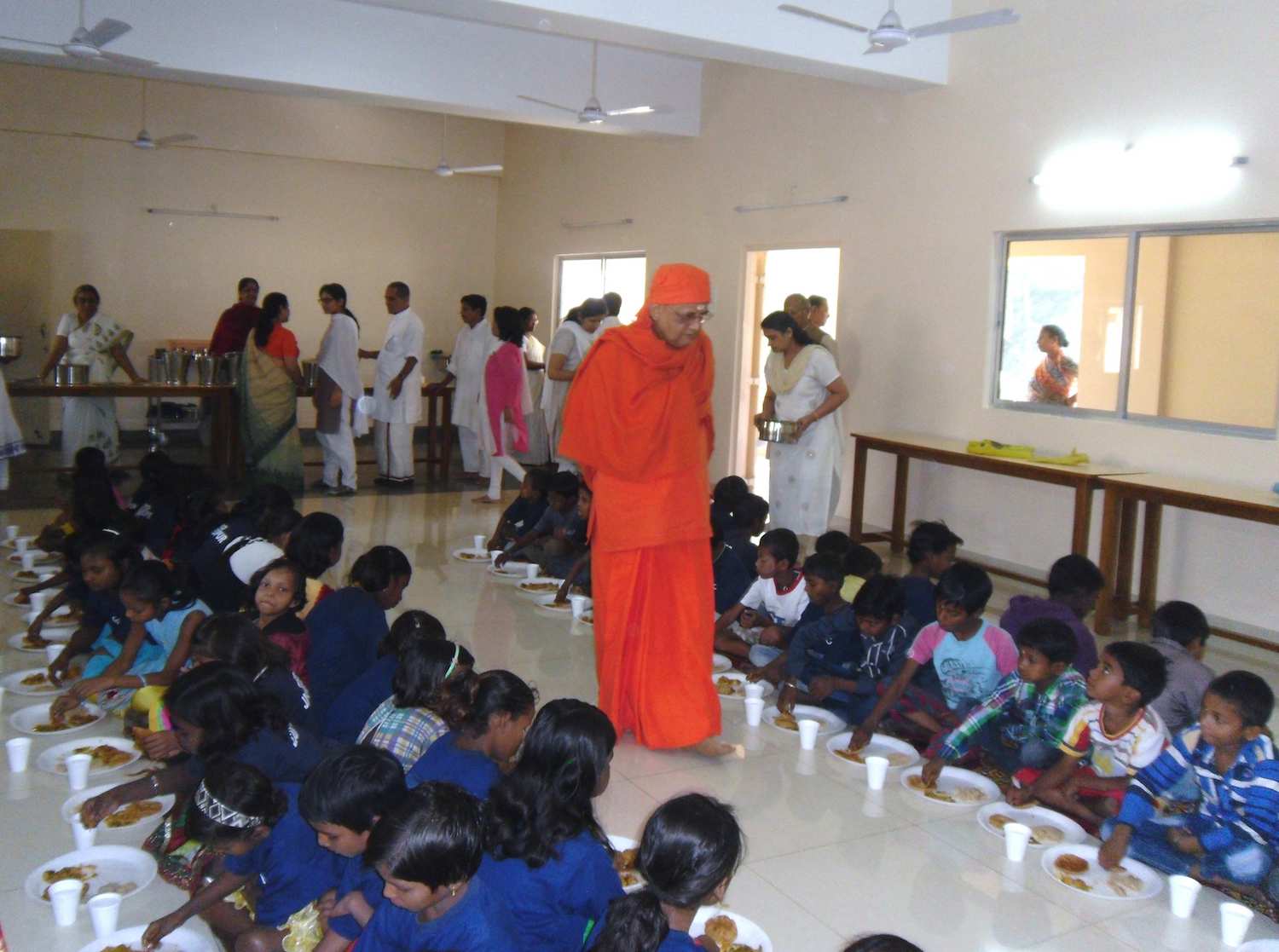 On Sunday 16th November, about 80 children from the cultural heritage class had a hearty interaction with Nutan Swamiji. They chanted various ślokas, sung bhajans and recited poems. Swamiji exposed them to ‘values’ by narrating humorous and touching stories. The children were served bhakti bhojanam in the Annakshetra.

Reproduced from Vicharasethu, Dec 2014, the monthly journal from the Ashram