The Journey Within - Enlightened Living - Dec 2018

The annual spiritual residential retreat “Enlightened Living – Walking the Inner Path” was held by Nutan Swamiji from 1 to 15 December 2018 in CIRD Jamshedpur. The ‘lifetransforming experience’ as expressed by past participants, inspired seven of us earnest participants from Malaysia to be part of this rare opportunity. Though not all of us knew each other well, we warmed up easily.

The first phase of this pilgrimage was facilitated seamlessly by Ashram and SIRD Malaysia. We only had to book our flight tickets! The moment our feet touched the soil of Bharat, we were enveloped with love through the extended family of CIRD from the arrival hall of Kolkata airport to the doorsteps of CIRD Jamshedpur. There are many to thank for.

In the lap of Śruti Mātā (Upanishadic Mother)

The inaugural evening started on 30 November 2018 with soul-stirring devotional bhajans by Sri Neelkamal Tiwari. We were formally introduced to the devotees who welcomed us with warm hearts. Their warmth and hospitality continued throughout the retreat and we felt very much at home. 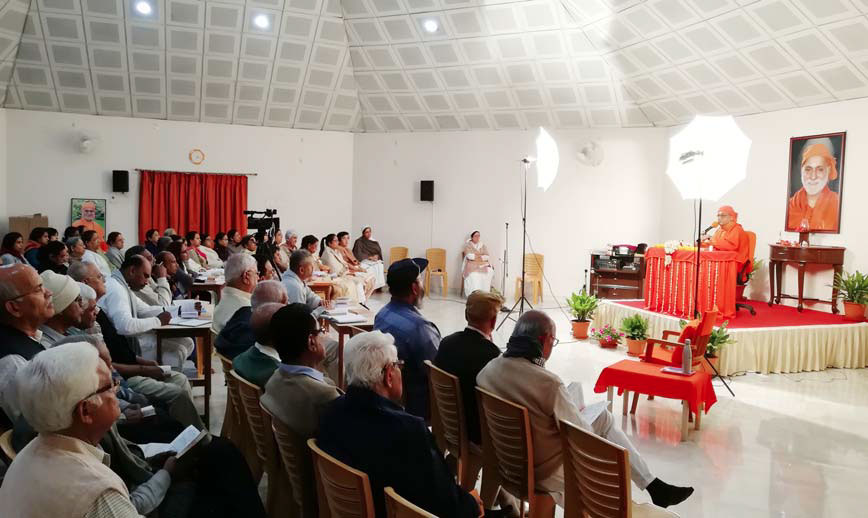 The actual Enlightened Living retreat started on 1 December with morning prayers and chanting of Viṣṇu-sahasra-nāma. Swami Nirviseshananda Tirtha commenced the discourse themed “Sādhanā Catuṣṭayam – the Four-fold Qualities of a Seeker”. This was complemented with Chapter 18 of the Bhagavad Gita, “The Yoga of Renunciation” in the evening sessions.

Throughout the discourse, Swamiji clarified emphatically, that there is no question of running away from karma but it needs to be performed with yoga attitude. One has to act according to viveka-buddhi - intelligence anchored in the Truth. Swamiji further stressed that in any action (karma), there is no question of renouncing the objective result, which is always a causal consequence of action. What truly needs to be renounced is the clinging to the thought of personal gain and happiness from the objective result.

The learnings from Sādhanā Catuṣṭayam were illustrated further through the discussion on the Upanishads specifically touching upon Muṇ·aka Upanishad and Kaṭhopanishad. From the latter, Swamiji took us through the story of Nachiketas, the young boy who unfortunately
was sent to Yamaraja (God of Death) by his father. Through the behaviour of Nachiketas, the Upanishad shows that the fitness to receive the ultimate knowledge of Truth is a pure and desire-free mind.

In Muṇḍaka Upanishad, Śaunaka, a great householder, approached sage Aṅgiras with humility, and enquired: “By knowing what, everything will become known?” Śaunaka was fit for the enquiry to know the Truth as he had followed all the principles of dharma in his household life, and become free of greed and desires. Swamiji explained that as a test of spiritual evolution, we should all look into our own minds truthfully. 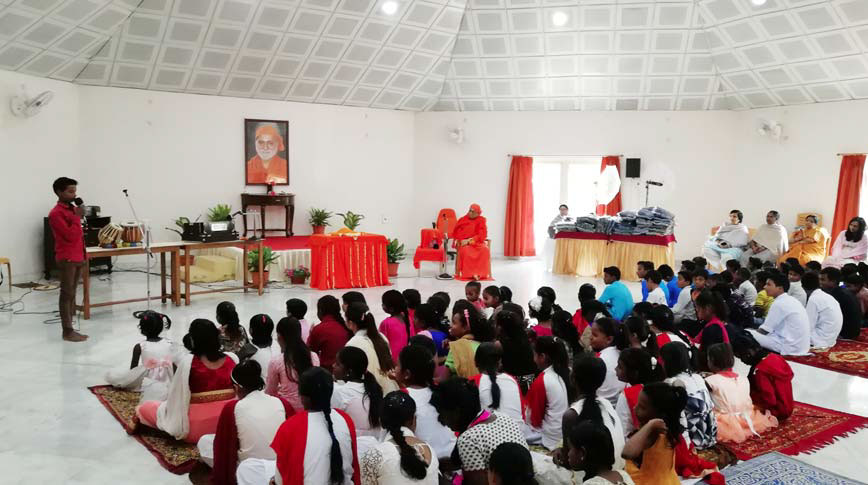 During the evening Bhagavad Gita discourses, Swamiji’s exposition on Chapter 18 provided us with an in-depth explanation on what needs to be renounced and the effects of the three guṇas in performing action. What we “feed” our mind, body and intelligence, will make our personality, by which we evolve towards sattva-guṇa and eventually transcend that too.

In the concluding morning discourse, Swamiji elevated our minds to a sky-like dimension by presenting the highest Truth to be contemplated upon based on verses 1.2.14 & 18 of Kaṭhopanishad.

Divine Grace: The most significant part of the retreat is the blessing to be in close association with Nutan Swamiji. Besides the daily discourses, we looked forward to the evening walks with Swamiji. During this time, we delighted in Swamiji’s company, simply listening to his insightful narrations related to interesting incidents in his personal life. Some of us took this golden opportunity to enquire further on various spiritual perspectives and Swamiji was ever willing to share his rich knowledge.

Throughout the retreat, besides Nutan Swamiji’s physical presence, Poojya Swamiji and Mā Gurupriyāji’s presence was also felt by listening to Poojya Swamiji’s Prabhātaraśmiḥ on the qualities of a seeker after the early morning prayers, and Mā’s audio discourse on the importance and
significance of chanting. It felt like Narayanashrama Tapovanam had come alive in Jamshedpur. 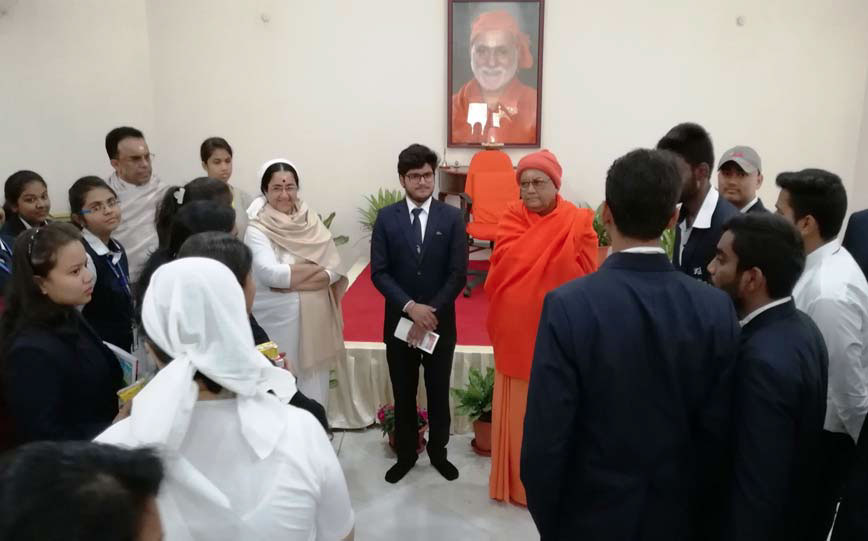 Austerity: All of us had to adapt to Ashram way of life which is totally different from our usual routine. The regulated Ashram life helped us to discipline our mind and taught us how every piece of work small or big should be carried out with śraddhā (attention).

Harmonizing the vocal chords: During the chanting classes held in the afternoons, we learned proper Sanskrit pronunciations and reciting Viṣṇu-sahasra-nāma. Initially it was like a cacophony but with the strong encouragement from Brni. Namrataji and Brni. Nanditaji, we eventually improved as a group.

Inculcating values and knowledge at a tender age: About 80 children from the impoverished surroundings regularly attend the CIRD Cultural Heritage class. These children showcased their talent and knowledge of Bhagavad Gita and Mahabharata by recitation of ślokas and bhajans. They also shared short stories which carried moral connotations. Swamiji interacted with the children encouraging them to imbibe the values learned in their daily lives. Towards the end, Swamiji empowered these children to never forget the strength within to make a difference for the country and never to let the nation down. The cordial interaction not only moved Swamiji but all of us present.

The joy of sharing: There is no greater joy than caring and sharing. It was a sublimating experience for all of us being part of the annual Dāna Satram where 1000 blankets and sweet prasāda were distributed to destitute families. The event started with prayers and Swamiji reciting ślokas. Swamiji also informed the recipients: “The funding comes from donors around the world who always think of your well-being”.

Flavour of Jamshedpur: On a pleasant Friday afternoon, we embarked on a tour around Jamshedpur with Swamiji reminiscing where he spent his early days. Swamiji showed us the two houses (Ammini Aunty’s and RS Tiwariji’s) where Poojya Swamiji had stayed during the initial Jñānayajñas in Jamshedpur. The evening ended with a stroll in the expansive floral garden of Jubilee Park.

Harnessing young minds: On 7 December, discourse on the “Secret of Excellence” was held for students from ARKA Jain University. Swamiji shared that being successful is to be successful with your own mind and the key to excellence is to do everything with love, sincerity and humility. Swamiji further shared that one should work from joy and not for joy. The students’ enthusiasm on the subject was demonstrated by the questions raised during and after the Q&A sessions. Overall, the students felt the knowledge acquired will help them better manage challenges they face.

On 14 December, discourse on “Inculcating Values in Children” was held for students and staff from DBMS B.Ed. college. Swamiji’s message for the teachers is to first possess the virtue they would like to inculcate in the children. Apart from that, as the nurturers of young minds, they must approach the children with knowledge and reason.

Building the Nation: A field trip to TATA Motors was organized on Friday, 14 December. The Tata family’s contribution to the Nation is to be applauded. There was a sense of belonging amongst the staff and they were visibly proud of being a part of the Tata legacy. We were impressed with the guided tour around the factory and the demonstration of the truck-test-drive at the test-track, which, we were told, is the first of its kind in India. 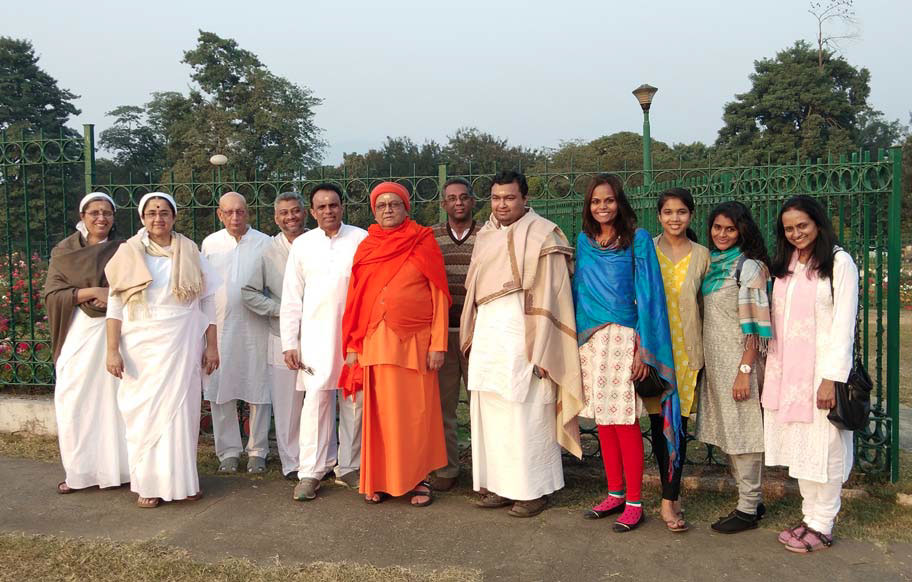 There was an overwhelming feeling of warmth in the cool climate. Time passed swiftly. The seekers took away priceless pearls of Brahmavidyā, handed down by generation of Knowers through the Vedic tradition in this great land of Bharat. The participants expressed their humble praṇāms to Nutan Swamiji and their gratitude and appreciation to Ashramites, SIRD Malaysia and CIRD Jamshedpur family for the love showered on them. “Our Dakshiṇā for this priceless Knowledge is to actualize it!”