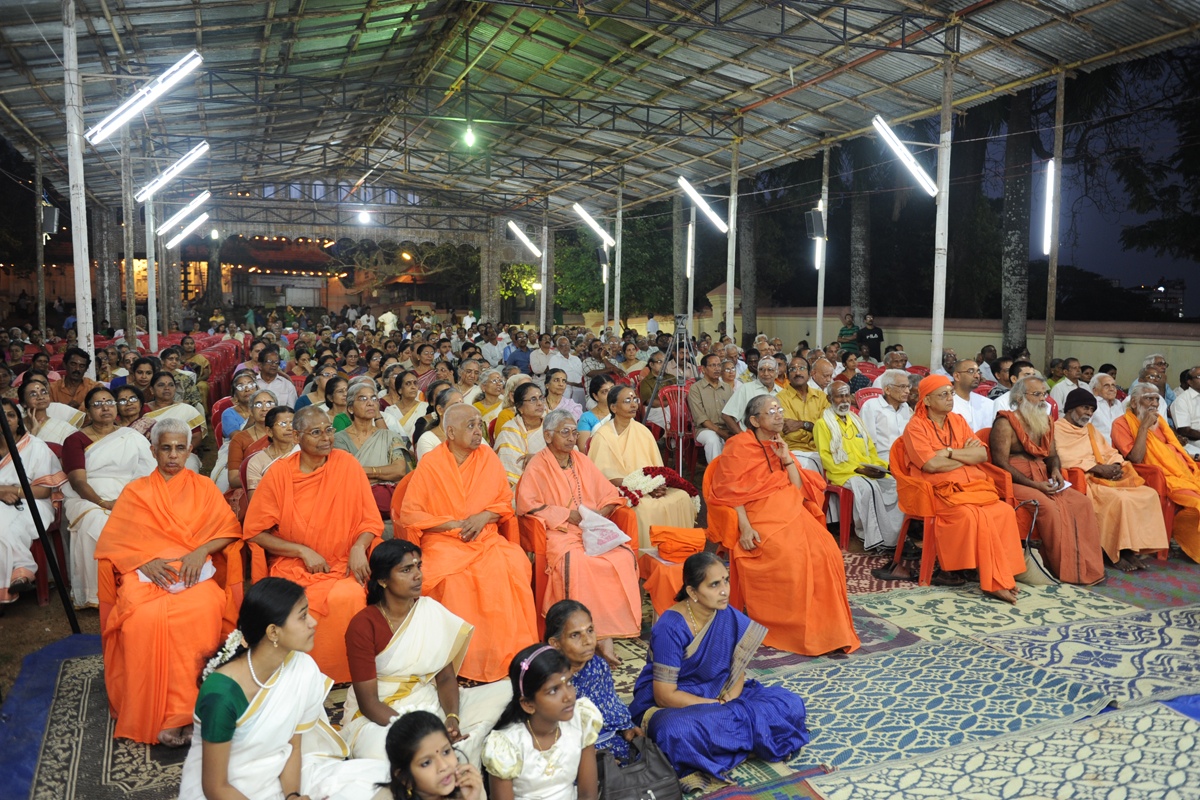 It was the year 1995, Poojya Swamiji had been effectively spreading the benediction embedded in the messages of the shastras in places like Jamshedpur, Delhi etc. away from Thrissur. In Thrissur, Swamiji used to hold special satsangs in the Ashram in Venginissery on Sundays where he would expound on Upanishads and texts like the Bhagavad Gita and Vivekachudamani in Malayalam.

The devotees in Thrissur felt that this exposure needed to be more focussed and encapsulated. Further, traveling conveniences not being greatly developed, it was felt that not many people would be able to come to the ashram. So it was proposed that Swamiji would hold a Tattva Sammeksha somewhere in Thrissur. Soon, the most appropriate place was selected, the Thrissur Vadakkunathan Temple Sreemoolasthanam located in the heart of the Thrissur Town in Thrissur round. An evening time was selected in such a manner that people would be able to attend after completing their working day and yet not miss the travelling convenience. It was felt that each year, Poojya Swamiji should expose the key concepts hidden in one of the chapters of Bhagavad Gita, such a satram would continue for 7 days in the very first month of the calendar each year, thus marking an auspicious beginning to the new year.

Thus the first Gita Tattva Sameeksha Satram was initiated 18 years ago, in January of the year 1996. Regularly, since then, the Satram has been conducted and the last year 2013 saw the concluding chapter on Moksha Sannayasa Yoga being explained to the gathering.

It was felt that this exposure and interaction should be continued with a renewed zest and the lofty Ashtavakra Samhita was selected for the purpose. The first of such discourses was conducted between 25 January and 1st February 2014.

The uniqueness of Swamiji's exposition of any text is the way it resonates with relevance to the modern work-a-day lifestyle. Poojya Swamiji too has always been exposing Bhagavad Gita as an administrative gospel, full of relevance to the house-holder, administrator or manager and professional oriented towards saadhana.

Efficacy of Exposure to Scriptures

There are yet others who, though not having enough
knowledge, take to their sadhana after listening to
scriptural exposition. Such seekers, given assiduously to
listening, too transcend mortality.

This may appear to be a unique statement. But on reflection, you will find that listening has a very important role in spiritual life. In fact, the entire Vedanta rests upon Shravana, manana and nididhyasana. The seeker has to go to the Knower and get exposed to the Truth attentively. Only when he does this first part, which needs the presence of a Wise Teacher, the other two, manana and nididhyasana, can follow.

Hearing is so inspiring, enlightening and forceful that it has come to be a great culture in this land. How is it that so many come to listen to Bhagavad Gita exposition? Most of the listeners may not take up further links of spiritual pursuit. But they would not like to miss their listening, whenever there is an opportunity.

Bhagavata Saptahas also have come in vogue like this. For hours together, people listen to the rendering of the Text and its stories. The session lasts for 7 days. Most of them cannot read the Sanskrit text themselves. Yet they love to listen to the narration.

Krishna says, even that kind of listening is good, effective and fulfilling. Such devout listeners will, in due time, by their intimacy and intensity, be able to transcend worldliness. After years of listening, they become oriented towards sadhana and that bestows purity and sublimity.